Statement from the successor of the GPS module:
… Since this product had gone end of life five years ago, the organization that was supporting it in Ireland was not longer providing support. …

Likely the ADU-07e continues to work with date 14 April 1999 on 14th April - unsure and not known if the leap seconds are counted correctly.

We will prepare a new firmware a.s.a.p. But you must open the ADU-07e and do some manual interaction (soldering a protection bridge - flashing and - enable the bridge again).

Hence that metronix pulled that request (informed by one of the ADU users) - the GPS manufacturer did not sent any not to us in advance.

Hence that after having installed the GPS update, the system either stop at selftest step 2 (short / long fast selftest active) or at step 52 (unified selftest).
Now you have to WAIT until G3fix appears on the front panel (that may take up to 15-20 min in worst case).
Then REBOOT and the system comes up as usual. 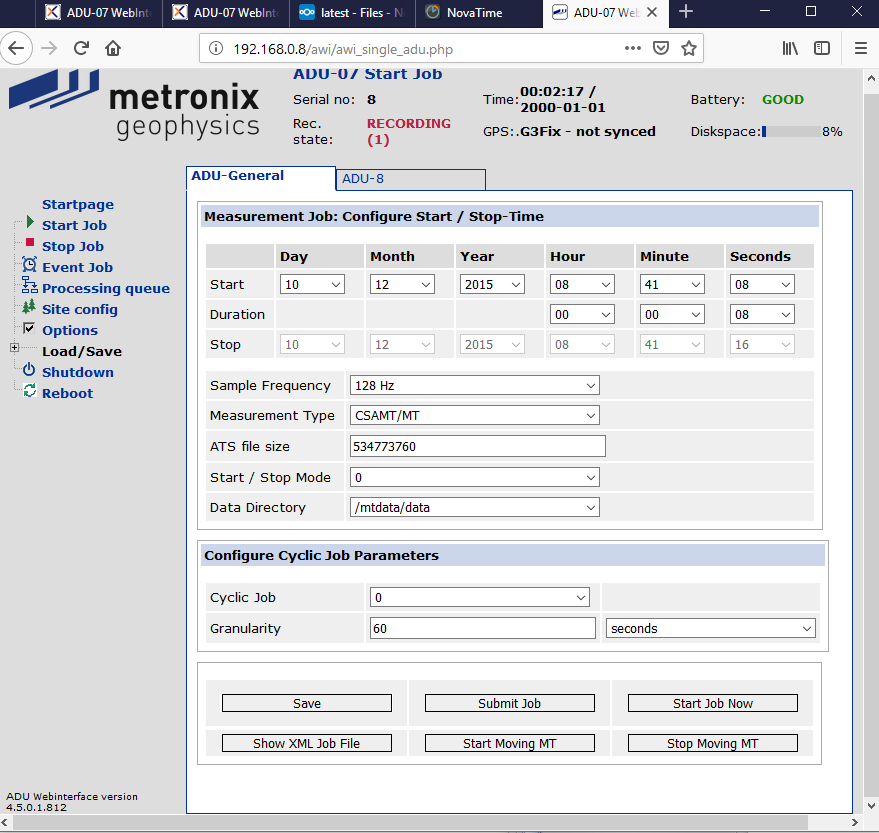 The ADU-8e is NOT affected
The new Revision II GPS (which is derived from the ADU-08e) is not affected. Only a few users have explicitly bought this GPS for ADU-07e

metronix does not take over any liabilities for malfunctioning of systems or sensors.
This has been already mentioned during the sales under “terms and conditions”.
As a quality manufacturer we do everything to ensure that you get best functionality and reliability with our instruments and sensors.
In this actual case the GPS module manufacturer made a firmware which did not cover the 10bit week number rollover.
After coming to know that a new firmware has to be changed we informed all clients world wide immediately.

We uploaded version 6. With version 6 for ADU-07e you will be able to use you android mobile phone for operating the system.
Hence that version 6 requires always an external WiFi dongle.
Version 6 will harmonize with the new ADU0-8e.

The GPS board is essential for the system.
It not only delivers time and position is also drives the recording frequencies.
In other words: if you want exactly 4096 samples/second the GPS needs G4Fix!
All other GPS states do not guarantee frequency and timing precision, especially need for remote referencing.

Understand: Time can not “jump” during recording is active. That would lead to corrupted timeseries. If the GPS is already locked again it will immediately sync all board during recording break.

As long you have G4Fix you do not need to care about anything.
For the ADU-08e with its new powerfull GPS this should always possible.
For ADU-07e users we do have a clock/gps module II, derived from ADU-08e, available.
It costs 420 EUR - worth only for users who are facing frequently reception problems.